A Sauvé Project in Israel: Support for African Refugees

The Jeanne Sauvé Foundation has been pleased to support this inspiring project to increase social support services for African refugees in Israel. African immigration to Israel began in large numbers in the latter half of the 2000s, mainly through the then lightly-fenced border between Israel and Egypt in the Sinai Peninsula. By January 2012, over 50 000 new African migrants had arrived, many fleeing war and violence in Eritrea and Sudan. Most African migrants are regarded to be legitimate asylum seekers by human rights organizations, but the Israeli government says most of them are job seeking work-migrants and has refused to grant asylum status or residency status to the vast majority of them. Their situation is precarious and many lack access to basic social support services in the country.

Sauvé Fellows Maya Fennig and Rachel MacNeil joined forces to think of ways to better support Asylum seekers in Israel. They partnered with the Israeli Ministry of Health and the Aid Organization for Refugees and Asylum Seekers in Israel, to develop and deliver training in interpretation and cultural mediation.

To date, many refugees living in Israel have graduated from the Interpreter and Cultural Broker Training Program Project. The graduates have already begun work as interpreters and cultural brokers in Israel, and obtained certificates acknowledging their additional skills built through the program. 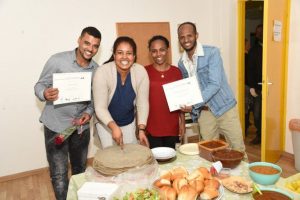 The graduates engaged in a collaborative curriculum that blends translating Western models of social work and psycho-social support with traditional knowledge and community-based practices from the participants’ own communities. The aim is to increase participants’ ability to effectively translate, mediate and communicate with people from different cultures as well as increase their knowledge and skills in psycho-social assistance.

The aim of the project is to improve and increase access to social support services, which are desperately needed to strengthen community support, culturally-based interventions and resilience among the Asylum seekers.

There are at least 7000 documented cases of trafficking and torture during the dangerous passage through the Sinai desert. These events, combined with the severe abuse and torture in their home country as well as a constellation of stressors in Israel including detention, discrimination and undetermined status, means many of these migrants arrive in need of significant mental health support. 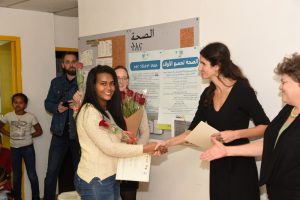 Congratulations to the two Sauvé Fellows who have taken action to improve the situation for these African refugees in Israel. We are very pleased to support this initiative and are humbled to read about the positive reports from refugees who participated in the program.