The heart of the Jeanne Sauvé Foundation’s Programming is an elegant four-floor mansion designed by renowned Montreal architect Robert Findlay. The house is situated in the city’s central “Golden Square Mile” district, on Avenue Docteur Penfield, named in honour of the pioneering neurosurgeon whose work unlocked many mysteries of the human brain.

Built in 1905 for prominent Montreal industrialist Harold Stearns and later occupied for 40 years by the family of Montreal stockbroker Paul-Émile Ostiguy, the red brick house combines elements of the Tudor and Gothic traditions that were popular among wealthy Montrealers in the early 20th century. 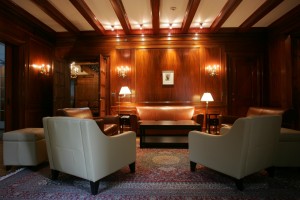 In the late 1970s, the house was acquired by a law firm specialized in patents, trademarks and copyright law. It was at that time that the house was enlarged to accommodate some 65 people in offices. Still later, it became the headquarters of the Gamma Institute, a futurist think tank.

The Jeanne Sauvé Foundation acquired the house in 2002. It was lovingly restored and modernized under the supervision of Harry Parnass, architect and Founding President of the Sauvé Scholars Foundation.

Today, the main floor, public rooms and magnificent staircase recall the glories of the beautiful residence of the past, while the Sauvé Fellows enjoy comfortable modern accommodations, sunny lounges, reading and study rooms, Internet access and all modern conveniences. The centerpiece is the communal kitchen and adjacent dining room, where Sauvé Fellows cook and share meals, enjoying new tastes and ideas. 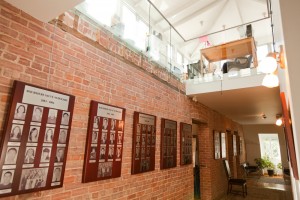 The different incarnations of Jeanne Sauvé House, family home, law offices providing expertise in protecting intellectual property rights, and futurist think tank, have combined into an ideal setting for the creative, thoughtful young people who live here as part of the Jeanne Sauvé Foundation’s programming, forging bonds of friendship and understanding while preparing for the next phase of their lives as agents of positive change.